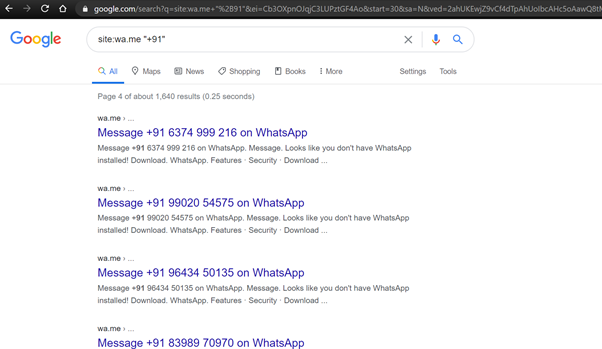 An error hunter named Athul Jayaram discovered that the phone numbers of users using WhatsApp’s ‘Click to Chat’ feature appear on Google Search. Facebook, the owner of WhatsApp, said that this is not an error; users can disable this option.

WhatsApp, one of the most popular communication services of today, has many different features that will make it easier for users to chat with each other. While it is a known fact that these features provide great convenience for users, in one of these features, an error has been discovered that causes the phone numbers of WhatsApp users to appear in Google Search results.

In the comments he made to Threatpost, the error hunter Athul Jayaram stated that users’ phone numbers were added to Google Search due to an error in WhatsApp’s’ Click to Chat ‘feature. Saying that this error is putting people’s privacy at risk, Jayaram added that malicious people can access other personal information through these numbers.

If we talk briefly about the ‘Click to Chat’ feature of WhatsApp, this feature is known for allowing users to start a WhatsApp chat with another user without saving their phone numbers. The feature is used by websites to interact with visitors.

According to Jayaram’s comments, the phone numbers of the visitors who use this feature to connect to their websites can be displayed in Google Search results by adding them to a directory. Saying that the phone numbers appear as plain text in the URL, the error hunter says that 300,000 directories have been created on Google so far.

Threatpost says that users’ photos can be viewed via WhatsApp profile, it can be used to find other social media accounts and discover much more about the person. Similarly, Jayaram underlines that these phone numbers can be sold to marketers, spammers and fraudsters.

Jayaram discovered this deficit on May 23 and reported it to Facebook. However, the company said that this is not an error, users can change their privacy options if they wish. “All WhatsApp users, including businesses, can block unwanted messages at the touch of a button,” said the company statement.

Why have I been blocked? ...
Read more
Economics

What’s Wrong With The Unemployment Rate?