JOSEPH OLAOLUWA delves into the business of hawking in the ever-present Lagos trafficFor Ernest James, his hands are  his shop.  Since he started selling...
Read more

The new contract Arsenal have handed out to David Luiz has been met by almost universal scorn.

It seems the majority of Arsenal fans are disappointed to have the Brazilian defender for another year, and pundits far and wide and have been taking aim at the decision by the Gunners’ hierarchy to keep the 33-year-old for a further 12 months .

“David Luiz hasn’t been a proper footballer for about three years,” lambasted former midfielder Emmanuel Petit . “But I’m not surprised that he has been given a new contract at Arsenal, because I’ve been very disappointed in relation to the club’s activity in the transfer market.

“If I was David Luiz, of course I would sign a new deal and I would also say a prayer of thanks to the Arsenal directors every time I wake up. Even when he last won the Premier League with Chelsea, he’s not the same player any more. This guy has lost something.

“To be honest, it’s a joke. Find some proper defenders. Are you telling me there are no young talented defenders on the market? I just don’t get it.”

That view is shared by many, but there is one very important person at Arsenal whose opinion differs drastically to the likes of Petit.

That is Mikel Arteta.

Arsenal’s head coach was determined to keep hold of Luiz. That was a stance he held long before the horror show at Manchester City last week that led to so many fingers being pointed in the direction of the former Chelsea centre-back .

In the space of 25 minutes, Luiz came off the substitutes’ bench at the Etihad Stadium and gave away a goal, conceded a penalty and got sent off. It was a calamitous performance, one he immediately held his hands up for.

“It’s not the team’s fault, it was my fault,” he said immediately after the 3-0 defeat. “I think the team did well, especially with 10 men, it’s just my fault.

“I took the decision to play, I should have taken another decision in the last two months, but I didn’t. It was all about my contract, whether I stay or not.

And it is that sort of attitude which has made such an impression on Arteta in his short stay so far in north London. The Spaniard sees Luiz as a vital member of his squad and was steadfast in his desire to keep him.

A poor performance at Manchester City, one which happened amid all the uncertainty of contract talks, was not going to change Arteta’s mind. Nor was the noise that was coming from outside the club.

“David is someone who is very honest, straightforward,” said Arteta.

“My opinion hasn’t changed from the moment I joined the team and it won’t change because of a difficult performance.”

Arsenal announced Luiz’s new deal on Wednesday morning, along with confirmation that both Pablo Mari and Cedric Soares had agreed four-year permanent contracts and that Dani Ceballos would remain at the club until the end of the season before returning to Real Madrid.

“I am really happy that we will have these players in our squad for the future,” proclaimed technical director Edu. “They have been part of the long-term technical plan Mikel and I have developed. They bring the right balance to our squad.”

Turning his attention to Luiz, Edu added: “David is a really important player for us He has played most of our matches this season and has been important for the team. 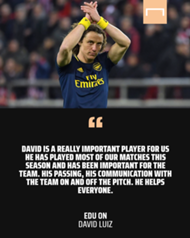 “His passing, his communication with the team on and off the pitch. He helps everyone.”

That is a view that is shared by Arteta. Despite what happened against Manchester City’s, Arsenal’s head coach remains fully behind the experienced centre-back.

Prior to lockdown and football’s suspension in March, Luiz was the standout performer in an Arsenal back four that kept five cleans sheets in seven games.

Had the defender signed a year-long extension back then, few would have batted an eyelid. It would have widely viewed as a sensible decision. But wind the clock forward three months and it being viewed as a massive error.

One of the main reasons for concern, certainly amid the Arsenal fanbase, is the fact that Luiz is a player represented by Kia Joorabchian, the ‘super agent’ whose influence seems to be growing at Arsenal by the day.

Many believe that Arsenal’s head of football Raul Sanllehi and technical director Edu are starting to rely too much on the likes of Joorabchian and Arturo Canales, another agent who now works closely with Arsenal, and are following their advice too closely when it comes to the transfer market rather than focusing on the club’s own scouting network.

Canales represents Mari, who has signed a four-year deal despite currently being out with a ‘significant’ knee injury and who had made just three appearances since joining on loan from Flamengo in January. He also represents Unai Emery, who Sanllehi played a key role in hiring following the departure of Arsene Wenger.

These are all justifiable concerns, and for a club the stature of Arsenal to seemingly be heavily influenced and directed by agents is a worrying development, and one that does not bode well for the future – especially at a time when the club’s finances are in such a delicate state.

But who Luiz’s representative was played no part in Arteta’s desire to keep the defender for another year. Arsenal’s head coach accepts that the Brazilian can make mistakes, but believes the positives outweigh the negatives.

He sees Luiz’s experience as vital, especially with such a young squad and with 19-year-old William Saliba arriving later this summer following his loan with Saint-Etienne.

Huge things are expected of Saliba, but it must be remembered the centre-back is still a teenager and will need time to settle in England and adjust to the Premier League. He has, after all, made just 32 senior appearances in his career so far.

Arteta sees Luiz as being vital to helping Saliba settle in at Arsenal. And given Luiz is unlikely to be a regular starter next season, what he does in the changing room and at London Colney could be just as important as what he does on the pitch during the final year of his stay in north London.

Ultimately, only time will tell whether Arsenal’s decision to keep Luiz proves to be the correct one or whether it will go down alongside some of the other mistakes that have been made in recent years, such as Mesut Ozil’s eye-watering contract or allowing Aaron Ramsey to walk away for nothing.

One thing that is for sure is that the pressure will be on the Brazilian when he returns from his suspension against Sheffield United on Sunday. Arteta will want to see a response from a player he still views as his leader at the back.

Whether Luiz can deliver on that remains to be seen.

JOSEPH OLAOLUWA delves into the business of hawking in the ever-present Lagos trafficFor Ernest James, his hands are  his shop.  Since he started selling...
Read more
Africa