‘Who is this small boy?’ – ‘Skinny’ Ndidi on making World Cup squad amid intimidation

THE OBASEKI HERESY: Economists, Politicians and the Death of Nations

Wilfred Ndidi has revealed how he overcame a barrage of intimidation en route to making Nigeria’s squad for the 2013 Fifa U20 World Cup.

Having been dropped from the Golden Eaglets’ team for the 2013 African U17 Championship staged in Morocco owing to an MRI controversy alongside Ibrahim Abdullahi and Emmanuel Asadu, Ndidi was promoted into the U20 team thanks to his superlative talent.

At that time John Obuh’s Flying Eagles were preparing for the global showpiece in Turkey, and the 16-year-old had to prove his worth to make the final list.

And that never came easy for the defender because of his ‘skinny’ appearance. In his discussion with Out of Home Podcast, the Nigeria international recounted his experience and how he never submitted against all odds.

“When I got to the U20 team, I was seeing these guys. They were professionals who were already playing in the league. They were strong when compared to myself, a skinny boy coming from an academy to the U17’s and now to the U20’s,” Ndidi said.

“I wasn’t intimidated because I knew what I was there to do and not to make friends. Everything worked in my favour because I trained with older people growing up in the barracks.

“I only started training with my age mates when I was in the Nath Academy, so I was already used to training with bigger guys so I wasn’t scared. To me, it was just normal.

“You might be stronger than me, but I won’t give you my body to overpower me.”

Ndidi trained under Flying Eagles’ assistants as the chief coach was in Germany for important assignments. However, things got worse on his return as he did not hide his challenge with his physique. 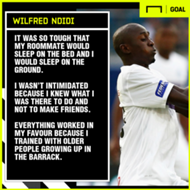 “The coach wasn’t around because he went for a course but the other officials liked me and they were saying I was young, intelligent and they were encouraging me. But when the coach returned from Germany, he was like ‘why did you put this small boy in the defence?” the ex-Genk man continued.

“Getting that from a coach I like and who was popular in Nigeria got me so sad, I became nervous and didn’t know what to do.

“He never saw me play except during training but he was getting updates from other officials but he kept asking why a small boy was put in the defence and all that but [other officials] kept saying ‘that boy is good’.

“I didn’t make the cut when he announced the list but when I was about leaving [the camp], some of the officials said ‘you are not going anywhere, he has to see you play’. Then a game was organised for me for the coach to see me play.

“During the game, I played so well but the moment I was substituted our opponents scored against us. After the game, he came to me and said you did very well today.

“For me, you are not strong to be in the central defence but I will take you to Toulon tournament so that other teams can see you and maybe want you, but you are not going to the World Cup because I need a strong player. I wasn’t bothered as long I was going to Toulon.”

In France, Nigeria U20 returned home with their heads bowed low after a devastating outing that saw them record two wins and two draws in Group B that had Brazil, Portugal, Mexico and Belgium.

But for Ndidi, it was his saving grace to remain in the team as he proved his class following Obuh’s decision to rest others.

He added: “The mistake he made was that he rested his best defenders throughout the tournament and I was playing in the central defence. I played against Lukaku brother [Jordan]. Even the Brazilian coach [Alexandre Gallo] said ‘you are a young boy and you are doing well’. He also encouraged me because he liked the way I played.

“We didn’t go far in the competition but I was doing well while he rested his best defender. When it was time to reveal his final list, he came to me and said: ‘You did very well in the tournament and my officials are happy with you. You are going to make the World Cup team but I don’t think you will play. This is not a pre-season tournament in case but you are not going to play’.

“From you are too small to travel to Toulon and now making the World Cup – I was happy because I was getting the opportunities for free because some people were trying to pay to make the team – it was really bad.

“When we got to the World Cup, we lost the first game 3-2 to Portugal. The best player he rested wasn’t fit. He was just training but wasn’t fit for the matches. The other officials came and told him ‘Play this boy. He did well in Toulon, just try him’. Then I got to play the first game.”

Ndidi went ahead to play in his first game in the 3-0 defeat of Cuba, then a 1-0 victory over South Korea and the failed Round of 16 encounter against Uruguay.

The Leicester City star, Moses Simon and Shehu Abdullahi are the only players in Obuh’s 21-man team who made it to the senior national team, Super Eagles.

THE OBASEKI HERESY: Economists, Politicians and the Death of Nations

Twitter’s founder and CEO, Jack DorseyIt is no more news that US-based social media company Twitter Inc has concluded plans to establish a presence on...
Read more
The Prism News