The Reds have been linked with the England international, but their manager says he would be as surprised as anyone if the transfer happened

Jurgen Klopp has ruled out a summer move for Jadon Sancho – despite admitting the England star would “look good” in a Liverpool shirt.

The Reds have been credited with an interest in the Borussia Dortmund star, who is also wanted by Premier League rivals Manchester United and Chelsea, among others.

Sancho is valued at more than £100 million ($123m), meaning a switch to Merseyside this summer is unlikely.

Liverpool have already rejected the chance to sign one target, RB Leipzig striker Timo Werner, due in part to concerns at the financial implications of the coronavirus crisis.

And it is anticipated that it will be a relatively quiet summer, transfer-wise, for the newly-crowned Premier League champions who already have a settled squad.

Klopp was asked directly about Sancho at a live event hosted by German publication BILD and replied: “A red jersey would look very good on Jadon. But I don’t think such a transfer will take place this summer.

“He is a very interesting player. If he moved to Liverpool, I would be the most surprised of all!”

Klopp also dismissed the idea that he was now the best coach in the world after guiding Liverpool to their first league title since 1990, insisting that rival Pep Guardiola remained top dog in that regard.

“I can’t do anything with the title ‘Best coach in the World’,” he said. “But I know that, together with the whole coaching team, we are very good coaches.

“But I think Pep Guardiola is the best coach of the world.” 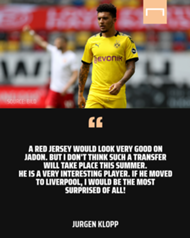 Discussing his own side, who wrapped up the Premier League with an incredible seven games to spare following Manchester City’s defeat at Chelsea on Thursday, Klopp repeated his belief that Liverpool can kick on and win more trophies.

“This team doesn’t need a change,” he said. “I cannot promise that we will dominate football now, nor do I know if it is time to talk about major upheavals, but I know that our goal is to keep the team together.

“The boys are currently a great football age. We made a lot of right decisions together. If I have a talent, it is probably that I can bring extremely good people together.

“For example, my coaching staff is exceptional, but there is no single recipe. It is also important that we have continued to develop.

“The problem in Dortmund was that our team fell apart. That didn’t happen here and now the team has been exceptionally consistent for two-and-a-half years. We play every game as if it were the last one because we have nothing else to do on weekends!”

A health worker takes a swab from a woman during a community COVID-19 coronavirus testing campaign in Abuja on April 15, 2020. PHOTO: Kola...
Read more
The Prism News