The Barcelona prospect was almost a stranger in his home country, but by the end of the 2005 Under-20 World Cup he was on the way to stardom

Among the billions of people worldwide that follow football, there can be few who are at this stage unaware of the achievements of Lionel Messi.

Over the last decade and a half, Messi has made himself one of the most famous sportspeople on the planet thanks to his exploits with Barcelona and Argentina, a path that was already hinted at when he waltzed to Under-20 World Cup success in 2005. There was a time, however, when he was just another young hopeful – albeit one marked out for future stardom – and even his compatriots were not entirely sure who he was.

The year before Messi and his team-mates took the title in Netherlands, Barcelona’s office received a fax from an Argentine FA employee requesting the release of one of their youth team players for an upcoming training camp. It may have taken a moment of head-scratching before the Catalans discovered that “Leonel Mecci”, as the missive erroneously stated, referred to their budding star, then 16. The error was swiftly corrected in Barca’s response, which explained that Messi was needed for the Youth Copa del Rey.

By that point the Rosario native had already turned down numerous call-ups from Spain to join their ranks, while the Argentine set-up dragged its feet over including him. Now, though, the AFA was determined to land their man, and insisted Barca put him on a plane to Buenos Aires.

Messi arrived at the nation’s Ezeiza training base on June 25 and, four days later, disputed his first-ever game in Argentina colours, a U20 friendly against Paraguay organised specifically to guarantee his allegiance to his nation of birth. With the hosts already 4-0 up in front of a near-deserted Estadio Diego Maradona – forced to charge an entry fee to ensure the game was official, the organisers had asked fans merely to bring a newspaper to pay for the ticket – he was thrown into the action and got his name on the scoresheet as Argentina ran out 8-0 winners.

“Warm up, kid! Don’t you want to play?” Gerardo Salorio shouted at the teenager at half-time. The U20 fitness coach apparently thought Messi looked a little lethargic on the bench as Hugo Tocalli prepared to rotate his troops. “When I spoke to him like that he woke up straight away,” he explained to Anfibia.

“He got that look of a lion that I saw on his face so many times since. And he started to run quicker.” From that rather muted start, Leo soon became a key part of the Albiceleste set-up, scoring six times in the 2005 South American Championship to seal passage to the World Cup.

It is debatable whether he went into that tournament as its biggest attraction. Certainly to local fans at least Sergio Aguero would have been the more recognisable figure. He made his Independiente debut in the Primera Division two years prior at the age of 15 and established himself as a first-team regular when the World Cup arrived. Even Kun himself had no idea who his new team-mate was.

“He was on my right and I was talking about trainers with [Ezequiel] Garay and [Lautaro] Formica. Leo at some point said something about the United States,” Aguero told DeporTV.

“I watched a lot of football, but from Argentina, not Europe. I asked Leo, ‘what was your name?’ ‘Lionel’, he replied and burst out laughing. And I say, ‘what about your last name?’

“’Messi’, he answered. And the others asked me, ‘don’t you know who he is?’ I knew from the news there was a talented kid from Barcelona and I said, ‘this is him’. Then I saw him train and realised just how good he was.” 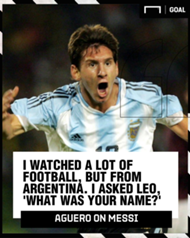 A young Boca Juniors midfielder by the name of Fernando Gago was also impressing in Primera, while Messi had made only a handful of appearances for Frank Rijkaard’s Blaugrana. Elsewhere the world expected brilliant things from the U.S.’s own gem, 16-year-old Fredy Adu, who as fate would have it lined up against Argentina in the opener. Spain’s hopes lay upon the shoulders of teenage Arsenal prodigy Cesc Fabregas.

When Argentina’s debut in the competition came around coach Francisco Ferraro left Messi on the bench in favour of Argentinos Juniors youngster Gustavo Oberman; a decision that has been queried ever since.

“I’ve been asked about this several times and I always say the same thing: the doctor told me Lionel had a muscle ache and it was best for him to play only the second half,” Ferraro told Ole. “He always used to be brilliant in the end but he struggled as a starter; one afternoon we met and Messi told us: ‘I was going to ask to be a substitute, I feel better in the second half.”

Ferraro’s decision seemed to backfire as the U.S. went ahead just before half time through Chad Barrett’s goal. Messi was thrown on at the break and immediately lit up the pitch with his mazy dribbling but there was no way back for the Albiceleste, whose defeat could have been more painful had Adu not erred from the penalty spot against Oscar Ustari.

The lesson had been learned. Messi started the next game, against Egypt, and opened the scoring from close range by converting Pablo Zabaleta’s low cross. Zabaleta wrapped up a 2-0 victory with a goal late on before Neri Cardozo sealed qualification to the last 16 with the solitary strike to down Germany in Argentina’s final group clash.

Messi, Ferraro recalls, was substituted late in that game, and was not amused. “That night we watched the video and the camera caught him: Messi’s face, my God!” he laughed. “’Why are you taking me off, mate?’ it seemed to say. A while after Salorio appeared in my room. He came with Messi, who said ‘I want to apologise for that look I gave you.”

Once that first hurdle had been cleared, Messi and Argentina were simply unstoppable. The Barca youngster scored in every knockout clash as the Albiceleste marched towards the trophy; Argentina’s equaliser against Colombia on their way to a 2-1 victory, their third of the evening as Spain were disposed of with ease, a scorching long-range drive to shock Renan in the Brazil net after just seven minutes. Renato pulled the Selecao back into the game, but Zabaleta stepped up once again to strike in the dying seconds and set up a final date with Nigeria. 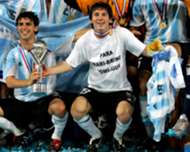 Unlike the repeated heartaches that were to come, Messi’s first taste of a tournament decider with Argentina went according to plan. Twice he was summoned to hit from the penalty spot, and twice he obliged as the Africans were defeated 2-1. “It was incredible how he took those kicks in the final,” Aguero recalled years later to TyC Sports, “he hit them as if he were in his back garden.”

Judging the future of any budding star from their feats at U20 level is a notoriously inexact science. The imposing Gabriel Paletta for one looked set for great things and the following year signed for Liverpool, but never followed on his potential at centre-back and now represents Monza in Italy‘s Serie C. Ustari was another who never quite lived up to that early billing.

Elsewhere in the squad the likes of Oberman and reserve keepers Nereo Champagne and Nicolas Navarro went to have solid careers in the Argentine top flight and Rodrigo Archubi saw a promising spell with River derailed when he tested positive for cannabis, a setback from which the midfielder never really recovered.

It is a testament, however, to the renowned system set in place at youth level by Jose Pekerman and continued by Tocalli and Ferraro that no fewer than six of that team – Leo, Aguero, Garay, Zabaleta, Gago and Lucas Biglia – took the field at the Maracana nine years later against Germany in the World Cup final.

As for Messi, 2005’s Golden Ball and Golden Boot winner, subsequent international glory has proved painfully elusive but those present in the Netherlands saw the first steps of a player that would go on to dominate the game for over a decade, re-defining in the process what most thought was even possible within the confines of the football pitch.