Was Quibi the good kind of startup failure?

Editor’s note: Get this free weekly recap of TechCrunch news that any startup can use by email every Saturday morning (7 a.m. PT). Subscribe here. Startup failure...
Read more
Africa

When David Luiz trudged back to the dressing room at the Etihad Stadium on June 17, many believed it was the final time we would see the defender in an Arsenal shirt.

He had just been sent off, bringing to an end a calamitous display for the Brazil international.

Luiz had actually started the game on the bench, but an injury to Pablo Mari saw him introduced midway through the first half.

In the 25 minutes that followed, he went on to make a mistake to gift Raheem Sterling a goal and then gave away a penalty for bringing down Riyad Mahrez, a foul which earned the former Chelsea man a red card.

Luiz’s dreadful cameo was all played out amid the backdrop of stories suggesting he could be on his way out of Arsenal, with the club having opted not to take up a clause in his contract to extend his stay by a further year.

“Listen, I’m not going to tear into him. It’s all been said before,” said Sky Sports pundit and former Liverpool defender Jamie Carragher. “I can’t get mad any more.

“I actually feel a bit sad because it’s probably the last time we’re going to see David Luiz in the Premier League. His contract is up; I said before the game I don’t think there’s any way Arsenal will renew it.

“He now faces a ban; that’ll only leave [Arsenal] a handful of games. Arteta didn’t pick him tonight [from the start], I doubt he will do again.

“I don’t think there’s any future for David Luiz at Arsenal next season, that probably just puts pay to that. The people at the top of the club are deciding that he shouldn’t get that year extension, and they’re right. If Mikel Arteta thinks he should get that year, then I think he’s wrong.

“I’d be worried if I was an Arsenal fan if Arteta thought David Luiz should get another year at Arsenal. I’d be worried.” 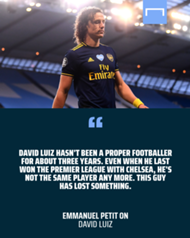 The criticism that came Luiz’s way after that performance at the Etihad was brutal; Carragher was far from the only ex-pro to call him out and Emmanuel Petit was even harsher in his assessment.

“David Luiz hasn’t been a proper footballer for about three years,” lambasted the Arsenal double winner. “Even when he last won the Premier League with Chelsea, he’s not the same player any more. This guy has lost something.

“To be honest, it’s a joke. Find some proper defenders.”

Despite all the criticism, Arteta was unwavering in his support in Luiz – even insisting he wanted him to stay in the immediate aftermath of his horror show at the Etihad.

And a week later, Arteta’s wish was granted with the centre-back signing a new one-year deal which would keep him in north London until 2021.

While many mocked Arsenal’s decision, the Spaniard was delighted.

He still saw Luiz an integral part of his plans, something that was highlighted by the fact the Brazilian returned to the starting XI as soon as the two-game ban he received for his red card at Manchester City was served.

He would go on to start all of Arsenal’s remaining 10 games of the season, including the FA Cup semi-final against Pep Guardiola’s side, when he produced a man of the match display to help Arteta’s side to a 2-0 win.

Luiz made 11 clearances, four interceptions and produced a crucial block to deny Raheem Sterling in the second half at Wembley, with Opta statistics showing he also won all four of his aerial duels and had more touches than any of his team-mates.

“The way he has been training and helping others has been phenomenal and I am delighted that people can now see this side of him as well and praise him because he deserves it,” said a delighted Arteta after the game. 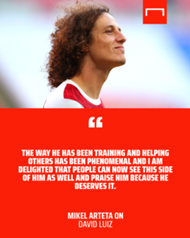 “He has won everything in different countries so he brings that [experience] with him. Not only that but I want him to perform on the pitch and he is doing that again in a really good way and I’m really happy for him.

“David doesn’t need a lot of management. What he needs is that we trust him and we don’t doubt what he can do.

“The best way to do that is to make him play. He can say that throughout his career he has had some difficult moments and some incredible moments, but big athletes go through those moments and I’m happy that he’s at the level he’s playing now.”

Luiz, who backed up that semi-final performance was an equally impressive showing when Arsenal beat Chelsea 2-1 in the final, will return to the Etihad for the first time on Saturday since his disastrous showing against Pep Guardiola’s side in June.

The 33-year-old has not made a mistake that has led to a goal since that 3-0 defeat in Manchester. After missing the opening weeks of this current season due to injury, he is back in Arteta’s side and building a good understanding with compatriot Gabriel, who has made a big impression following his move from Lille in the summer.

Arsenal go into Saturday’s game fourth in the Premier League, with their only defeat coming at Anfield when they were beaten 3-1 by champions Liverpool last month.

It’s been a steady start to the campaign for Arteta’s side, who continue to show signs of improving under their new manager, and the role Luiz has played – on and off the pitch – shouldn’t be underestimated.

“I’m learning every day with him,” said Gabriel, when speaking about his fellow countryman. And that’s why Arteta still sees Luiz as a vital member of his squad.

Arsenal’s manager accepts his centre-back can make mistakes, but he believes the positives outweigh the negatives and that’s why he was so determined to keep him around, despite the criticism that came Luiz’s way after his last appearance at Manchester City.

That performance will no doubt be in the Brazilian’s mind when he steps out at the Etihad on Saturday. It was a night to forget for Luiz in Manchester last time around, but the way he responded has proved he still has plenty to offer this evolving Arsenal team.

As Saturday's dismal draw with Manchester United underlined, the Blues boss has solved one problem with his change of tactics but created another...
Read more
Sport

The teenage wonderkid, Aston Villa superstar and the Mesut Ozil replacements for Arsenal

Was Quibi the good kind of startup failure?

Editor’s note: Get this free weekly recap of TechCrunch news that any startup can use by email every Saturday morning (7 a.m. PT). Subscribe here. Startup failure...
Read more
Africa

Visualizing the Economics of Coffee in One Chart

What goes into your morning cup of coffee, and what makes it possible? The obvious answer might be coffee beans, but when you start to...
Read more
The Prism News