By Emma Ujah – Abuja The World Bank has predicted a 14 per cent fall in global remittance flows in 2021, due to the impact...
Read more
Economics

The former Corinthians striker has been in and out of jail since hanging up his boots, but he is in no doubt that he was up there with the best

Every country that wins the World Cup deserves nothing but respect for its achievements but Brazil‘s 2002 side were arguably the last truly memorable team to lift the trophy.

From Champions League-winning defenders Cafu, Lucio, Edmilson and Roque Junior to that fearsome forward line, Luiz Felipe Scolari’s charges boasted the pragmatic discipline that was the hallmark of the wily old coach and a level of outstanding individual talent not seen in a Brazil team since the heyday of Zico and Socrates in the 1980s. Nowhere was that natural ability so evident than among the ‘Three Rs’ that led them to victory.

In Ronaldo, Rivaldo and Ronaldinho, Scolari had at his disposal a trio of players that would enter anybody’s top 20, if not top 10, for the finest players so far in the 21st century. Behind them was a 20-year-old Kaka, still not quite the finished product but soon to make the leap from prodigy at Sao Paulo to star in his own right with Milan, Real Madrid and, of course, the national team.

But there was another man who also led the line in 2002, albeit briefly – Brazil’s unheralded fourth attacker Edilson. The former Flamengo, Corinthians and Benfica man was far from reaching the heights scaled by his illustrious colleagues, but he at least is in no doubt that he deserves to be mentioned alongside the very best.

“At my best I was even better than Neymar. He has to win a World Cup to be better than me,” Edilson, now 48, affirmed to the stunned presenters of Os Donos da Pelota on Tuesday. But he was not finished, turning his aim on Lionel Messi and Cristiano Ronaldo: “I have personality. Messi, to be better than me, has to be a world champion.

“Cristiano Ronaldo only has strength, he shoots from the left and right. I am more talented than him.” 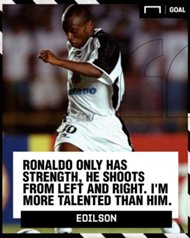 Nicknamed Capetinha (little devil), the native of Salvador, Bahia, was certainly not short of ability on the ball. Edilson was a relative late starter, representing defunct amateur side Industrial in the neighbouring state of Espirito Santo and Sao Paulo’s Tanabi before he was discovered at the age of 21 by Guarani, doing enough there to earn a move to Paulista giants Palmeiras the following year.

Back-to-back Serie A titles followed, as did a place in the Brazil team. He claims he was in line for a spot in the 1994 World Cup squad and was cut by Carlos Alberto Parreira after being blamed for the dressing room theft of a gold bracelet.

Back at his club, the arrival of Fredy Rincon relegated Edilson to the bench – leading to a loan switch at Benfica, his only experience of European football. Coach Artur Jorge was not impressed by the mischievous Brazilian, but with 17 goals in 31 games in Portugal he made himself an instant favourite with fans, who even began a fund-raising campaign in order to sign him on a permanent basis.

He went on to spend two seasons in Japan before embarking on the most successful spell of his career at Corinthians – a stint that included another two Brasileirao titles, a brace against Real Madrid’s Galacticos to earn a 2-2 Club World Cup draw in 2000 and the Golden Ball as that tournament’s best player as Corinthians took the crown over Vasco da Gama in the final.

As his nickname suggests, he was never above using the odd trick, provoking a mass brawl in the 1999 Paulista final against Palmeiras by juggling the ball near the touchline in the final minutes. Friend and 2002 World Cup team-mate Vampeta also recently revealed that he earned his place at the finals by double-crossing another hopeful.

According to the ex-playmaker’s autobiography, Edilson and Sao Paulo ace Franca made a pact ahead of a pre-World Cup international in which the pair would be leading the Brazil line. They would play each other in wherever possible, thereby making both players stand out in the race for a spot in Felipao’s squad. Franca held up his side of the bargain, assisting Edilson for a goal; but his colleague chose to go it alone and ignored his fellow forward throughout the game.

“Your friend is a traitor,” Vampeta heard from the furious Franca. “We agreed to pass to each other, he had three chances to give me the ball and he never did.” The ex-PSG man confronted Edilson, who admitted to the betraya. “We did agree to give each other the ball to guarantee a spot in the World Cup. But Vamp, I had three chances to pass to him, he was going to score all three.

“And I was going to be left out, so I didn’t give him a single one.”

Edilson, then on loan at Cruzeiro having previously moved to Rio giants Flamengo, went on to have a small but significant role at the World Cup, starting Brazil’s clashes against Costa Rica and Turkey and coming off the bench against China and in the quarter-final victory over England. At 29 it proved the pinnacle of a career that was already beginning to unravel.

The striker’s time at Flamengo ended due to a feud with Serbian star Dejan Petkovic, and a subsequent spell with Vitoria in his hometown of Salvador started promisingly with success in the Bahia State Championship but quickly turned sour. It perhaps had something to do with Edilson’s latest prank, when he ran into a training session brandishing a pistol.

“The Vitoria training ground had been robbed and I carried a gun at that time, I was always armed,” he recalled to TV Esporte. “When I arrived in my car I accelerated and the car threw up a lot of smoke, the guys were all scared because they’d been robbed the day before. I opened the window, pulled out the gun and fired four shots. They all ran into the woods, the president into the kitchen.”

Edilson’s final years as a pro saw him bounce from club to club, and it was not until 2016 at the age of 44 that the forward hung up his boots once and for all.

Retirement has brought its own difficulties, not least with the law, with three separate arrests for failure to keep up child support payments. The ex-forward was also accused of profiting from a fraud ring that targeted a sporting lottery, charges that he denies. Edilson currently acts as a pundit on Brazilian television, as well as sporadically pursuing a living in music management, a career which he claims he has dabbled in since his playing days.

“We lack more joyful players, who pull off nice, daring tricks,” he fired in a 2019 UOL interview bemoaning the current state of Brazilian football. The Little Devil certainly did not lack the confidence to take on the world with the ball at his feet and, while he may not be remembered in quite the same light as Ronaldo, Rivaldo, Ronaldinho and Co. he remains a cult figure in his native country, as well as a member of that exclusive club of World Cup winners that neither Messi nor Cristiano has yet been able to access.

The 21-year-old will not get the playing time he deserves under Mikel Arteta, the former England international midfielder has argued Joe Willock...
Read more
Sport

The Portuguese tested positive again for Covid-19 on Tuesday, ruling him out of the Bianconeri's Champions League showdown with Barcelona in Turin ...
Read more

By Emma Ujah – Abuja The World Bank has predicted a 14 per cent fall in global remittance flows in 2021, due to the impact...
Read more
Economics