Barcelona’s ‘brutal drama’: What does the new season hold for Messi, Bartomeu & Koeman?

Both the under-fire president and the want-away captain are still at Camp Nou, so it is hard to know what to expect other than more chaos in Catalunya

FC Barcelona: More than just a club. More like a bad soap opera.

Last season alone, we had allegations of theft, leaks to the press, a social media scandal, a row over pay-cuts and petty public arguments, a historically bad beating by Bayern Munich in the Champions League and then, to top it all off, the most dramatic transfer saga in football history.

So, what on Earth should we expect from the new season?

Let’s begin with the good news, anyway: Lionel Messi is still at Barcelona.

That may be a good thing for the media; every good story needs a compelling protagonist and an arch-enemy, after all. But it is an unwelcome distraction for the players and their new coach, Ronald Koeman.

Bartomeu’s continued presence at Camp Nou means that the club remains in a constant state of chaos, making more arguments and acrimony inevitable.

The president says he does not want to “get into any conflict” with Messi, but we are way past that point.

As he outlined in his sensational exclusive interview with Goal, the captain is furious with the way in which the club has been run in recent years.

“There has been no project or anything for a long time,” he fumed. “They juggle and cover holes as things go by.”

In addition, he remains upset that Bartomeu blocked his plan to leave during the off-season, even going so far as to accuse his boss of breaking his word to let him go.

Messi, evidently, no longer has any faith in Bartomeu.

Nor do 20,687 club members, who last week backed a motion of no-confidence in the president.

An official board announcement is due next week, and it is likely that there will be a vote on Bartomeu’s future in October. Should he be forced out before his tenure is set to end next year, a provisional board would oversee the election of a new president in December. 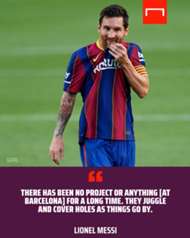 It is amid this atmosphere of mounting tension and incessant uncertainty that new coach Koeman must try to somehow concentrate minds on matters on the field.

Indeed, the Dutchman’s appointment as Quique Setien’s successor quickly became a footnote in the story of the summer as Koeman was relegated to the role of a minor character in what Messi referred to as “a brutal drama”.

Presidential candidate Victor Font, who has close ties with Xavi, has backtracked on his claim that he would remove Koeman halfway through his two-year contract even if the former sweeper won the treble. However, as it stands, Koeman is no candidate’s No.1 choice to lead Barca towards a new era of success.

As a result, the new boss knows that silverware is absolutely essential if he has to have any hope of holding on to his job.

So, with Barcelona set to begin their Liga campaign on Sunday, at home to Villarreal, what hope does Koeman have of reclaiming the title from Real Madrid?

On the plus side, the champions have not spent a single cent this summer, which means we can expect more of the same from Zinedine Zidane’s side – solidity in defence but issues in attack, as so perfectly illustrated in last weekend’s scoreless draw at Real Sociedad.

Madrid, then, can be toppled. Whether Barca are the team to knock them off their perch, though, is very much open to debate.

Encouragingly, the Catalans won all three of their pre-season fixtures, with Antoine Griezmann, Ousmane Dembele and Philippe Coutinho all getting among the goals, and it is imperative that the three most expensive transfers in Barca’s history rediscover their very best form if the team is thrive this season.

Spending outrageous sums of money on unsuitable signings is one of the reasons why Barcelona are in this mess. Granted, the coronavirus has hit the Catalan club hard, costing them €315 million (£287m/$366m) in revenue, but their income for 2019-20 was still above €700m.

Making money has not been the issue with Barcelona; the problem is that it has been wasted. And now there’s little left. As Koeman conceded on Saturday, “What I want [in the transfer market] is not possible from a financial point of view.”

Koeman’s preferred 4-2-3-1 formation should, at least, prove a better fit for many of Barca’s flops, including Coutinho, who has never looked comfortable as a midfielder or a winger.

Netherlands midfielder Frenkie de Jong, who excelled under Koeman at international level, showed flashes of his undoubted ability last season and should also benefit enormously from being deployed in a double-pivot alongside Sergio Busquets. 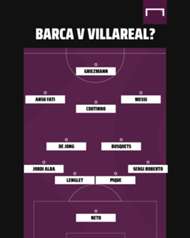 Luis Suarez’s departure for Atletico Madrid, of course, leaves a gaping hole in Barca’s attack, and there is an understandable fear that the decision to let him join a title rival could come back to bite the Blaugrana on the backside.

The manner of his exit has only further upset his Messi, who, in a heartfelt tribute to his good friend published on Instagram on Friday, also made sure to stick another boot into both Bartomeu and Koeman, who informed Suarez he had not future at the club via a brief phone call.

“You did not deserve for them to throw you out like they did,” the skipper told his fellow South American in an open letter which drew support from former Barca stars Neymar, Dani Alves, Cesc Fabregas and Samuel Eto’o. “But the truth is that at this stage nothing surprises me anymore.”

Koeman has denied disrespecting Suarez – “It seems that I’ve been cast as the bad guy in this movie but it’s not like that.” – and, from a purely sporting perspective, it’s clear that the Uruguayan is in decline, but he still netted 21 times and contributed 11 assists in 36 games in all competitions last season.

Suarez’s most likely replacement, Memphis Depay, would be thrilled with such statistics, given the 26-year-old Lyon forward has only once scored more than 15 goals across an entire campaign (22, in 2017-18).

Barca fans would much have preferred to see long-time target Lautaro Martinez arrive from Inter instead but they will, at least, take heart from the fact that 11 of Depay’s 19 Netherlands goals came in 18 games under Koeman.

Depay would also add some much-needed pace in attack, given Barcelona can look painfully slow when Dembele is unavailable for selection, which is a sadly regular occurrence.

The battle in Barcelona continues 👀 pic.twitter.com/Ee2t95DvDp

With Barca still trying to raise funds for transfers by offloading the likes of Martin Braithwaite, Samuel Umtiti, Jean-Clair Todibo, Rafinha and Junior Firpo, it could be next week before another attacker arrives at Camp Nou.

Against Villarreal on Sunday, fans are likely to see Griezmann, who hit 15 goals in 41 games last term, leading the line, albeit with the France star regularly changing position with Messi.

Ansu Fati should also play some part in the game, with the teenager’s inevitable promotion to the senior squad having been finally made official on Wednesday – along with his €400m buy-out clause.

Riqui Puig’s status remains uncertain, though. The 21-year-old was one of the few highlights of an otherwise gloomy 2019-20 campaign, but Koeman sees no regular role for him this term.

Consequently, the Masia product, who is adored by the fans, could be sent out on loan, particularly with new signing Miralem Pjanic now competing with Busquets and De Jong in midfield.

However, it has even been claimed that the former Juventus playmaker could be used as something of a modern No.10, asked to contribute as much defensively as offensively.

Consequently, Pjanic’s precise role is just one of the many fascinating subplots ahead of the new season at Barcelona.

Messi, of course, will be the star of the show once again, but with so many doubts over his supporting cast and Bartomeu refusing to get off the stage, it is impossible to know at this point whether this brutal drama will have a happy ending.