US pushes China decoupling, wiping billions off Apple and Boeing

NEW YORK/PALO ALTO, U.S. — The U.S. Department of Commerce’s new crackdown on Huawei Technologies’ access to American know-how kicked off a new episode of decoupling between the world’s two biggest economies while setting the tone of President Donald Trump’s China strategy during an election year.

Trump’s rhetoric on Beijing has turned increasingly aggressive in recent weeks as the coronavirus outbreak worsened in the U.S., but the Commerce Department’s new rule, announced Friday, is his administration’s first major economic measure against China after the two countries inked the first part of a trade deal in January.

But this risks setting off a dangerous game of chicken as threats of retaliation from China followed the U.S. move, which bans global players such as Taiwan Semiconductor Manufacturing Co. from supplying chips designed with American equipment and software to Huawei without a license.

“Based on what I know, if the U.S. further blocks key technology supply to Huawei, China will activate the ‘unreliable entity list’, restrict or investigate U.S. companies such as Qualcomm, Cisco and Apple, and suspend the purchase of Boeing airplanes,” said Hu Xijin, editor-in-chief at the Chinese Communist Party-affiliated Global Times, which published such a report Friday.

Such targeting, if materialized, would hit Boeing hard. The airplane maker is already troubled by the grounding of the 737 MAX after two crashes last year killed 346 people and a steep decline in air travel during the pandemic. Last month, Boeing said it was slashing 16,000 jobs, or 10% of its workforce. China alone accounted for 13.6% of the airplane manufacturer’s total revenues in 2018, before multiple tit-for-tat tariff rounds between the two countries. 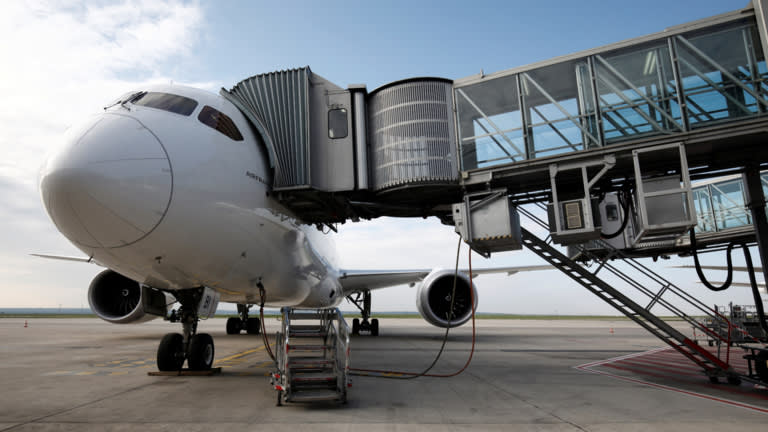 A Boeing 787 aircraft is seen on the tarmac at Paris Charles de Gaulle airport in France. The American company could suffer if China suspends purchases in retaliation of the U.S. ban on Huawei.

Qualcomm, which is betting its growth on the commercialization of fifth generation wireless technology, especially in China, is also banking on a demand recovery there to turn around a 29% profit decline in the first quarter mainly attributable to China’s coronavirus slump. But the “Chinese [will] likely move quicker away from Qualcomm,” said Brad Gastwirth, chief technology strategist at Wedbush Securities.

For Apple, the Greater China region, which includes Hong Kong and Taiwan, makes up more than 16% of total revenues, according to the company’s latest earnings. It relies on China for more than its enormous consumer market — the country is its biggest production base.

After U.S. intentions to double down on its Huawei ban had become known in March, Huawei’s rotating chairman Eric Xu said he does not think “the Chinese government would sit and watch Huawei be slaughtered” and warned of rippling ramifications if Washington went ahead with such a move.

But China could be “shooting itself in the foot by retaliating against U.S. companies in an effort to show how tough it is,” Wendy Cutler, a former U.S. trade negotiator and vice president at New York-based Asia Society Policy Institute.

Such targeting “could result in further driving U.S. companies out of China at a time they are needed to help contribute to China’s economic recovery,” Cutler said.

A tit-for-tat conflict along these lines could also be costly for the U.S., where the economy shrank by an annualized 4.8% in the first quarter. Over 36 million Americans have filed jobless claims since coronavirus lockdown measures began.

Still, political winds in Washington are blowing in the direction of an accelerated decoupling, with hawkish lawmakers calling for measures from economic sanctions to visa cutbacks.

“Evidence suggests that Donald Trump cares most about his own electoral prospects and secondly about trade,” said Daniel Russel, another policy expert at Asia Society Policy Institute, who served as an Asia adviser in the Obama administration.

“He has put the brakes on the China hawks in the administration and held up tough measures from the Commerce Department, or the State Department” when trying to negotiate a deal with Beijing, but “when he has found it politically advantageous, he proceeded that way,” Russel said.

In the wake of the COVID-19 outbreak, which started in China and has killed nearly 90,000 in the U.S., animosity has grown between the two countries, with each side pushing its own narrative about the pandemic to revile the other.

Beijing touted the superiority of its governing model in containing the outbreak, pointing to a high death toll in the U.S., and pushed an unsubstantiated theory about the virus being brought to China by the American military.

The Trump administration accused Beijing of coverups and collusion with the World Health Organization and claimed without evidence that the novel virus was leaked from a lab in Wuhan, China. A U.S. intelligence report also concluded that China initially downplayed the severity of the outbreak to hoard medical supplies.

On Thursday, Trump made the relationship with Beijing clear, saying said the U.S. could “cut off the whole relationship” with China if it wanted to.

“But for the U.S. and China, their bark has tended to be a lot worse than their actual bite and it’s because this integration can’t just be unwound overnight,” said Todd Mariano, director of political risk consultancy Eurasia Group’s U.S. politics coverage.

“China is a good wedge issue for Trump vis-a-vis Biden, because the Republicans will try very hard to paint [Joe] Biden as soft on China, and Democrats will also try to return the favor,” Mariano said.

Though broad-based measures such as tariffs are off the table because of the domestic economic slump, Trump still has at his disposable non-trade tools or more targeted measures such as the one seen with Huawei to get at China, which is limited to the more resilient technology sector while still making a strong political statement.

Over the past couple of years, Beijing has been hitting Trump where it hurts, namely agricultural states where he has supporters, many of whom rely on the Chinese market for soybean exports.

However, under the phase one trade deal, China is obligated to purchase billions of dollars’ worth of farm produce from the U.S.

“We feel that both sides are still incentivized enough to keep up the phase one deal,” Mariano said.