Is Okocha’s wonderstrike against Kahn the greatest African goal ever?

Where does the Nigerian maestro’s audacious moment against Germany’s legendary goalkeeper rank among the continent’s finest strikes?

It’s never straightforward picking out a best goal from an array of options. This is, in part, due to its subjective nature, with observers selecting in line with their preferences.

Ask observers of the game what constitutes a ‘perfect goal’ and there’s bound to be difference of opinion.

While some will opt for long-range belters, others may favour a well-worked team effort or moments of individual brilliance that leave the mouth agape in wonder.

Fans of this last option may well opt for Jay-Jay Okocha’s boldness in Eintracht Frankfurt’s 3-1 victory over Karlsruher SC in August 1993. Late in the game, with the away side trailing 2-1, Frankfurt launched a quick counter-attack, which seemed ready to end when Okocha received the ball with Oliver Kahn eyeball-to-eyeball.

A simple finish past the German will have sufficed, but the Nigerian seldom did the simple thing, did he?

Instead, he took the ball this way and that, briefly sending the blonde shot-stopper sprawling at thin air, thereafter teasing the Karlsruher defenders with even more feints, before unleashing a left-footed shot past the already bamboozled Kahn. 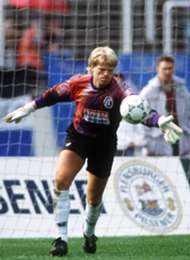 The iconic goalie wasn’t a household name at the time, but that effort has been replayed time and again over the years, with Okocha’s magical moment still eliciting rave reviews.

Kahn stayed helpless on the turf while the virtuoso trickster danced in celebration. In 2016, 23 years later, the eight-time Bundesliga winner joked that he was still ‘dizzy’ from being on the receiving end of the Nigerian’s brilliance decades before.

Witnessed by 32,000 supporters at the Waldstadion, the wonderstrike was voted Goal of the Year by viewers of the Sportschau.

The national award for best goal scored for or in Germany was claimed by Nigeria’s most-talented player of all-time in 1993, but where does it rank among a plethora of memorable strikes by Africans in history?

In fairness, such a call is extremely subjective and represents something of an impossible task, although there’s no doubt that African players have been responsible for some truly breathtaking goals.

It’s impossible to forget Michael Essien’s piledriver from 30 yards against Arsenal in 2006/07 or his left-footed volley in 2009’s Champions League semi-final second-leg against Barcelona at Stamford Bridge that went in off the underside of the bar.

Both ferociously struck efforts will probably be no match for Papiss Cisse’s strikes against the Blues on the same ground in 11/12. The Senegalese’s second in particular, in which he cut across the ball with his right foot to send a swerving effort from the inside-left channel past Petr Cech, also gets a mention.

Didier Drogba, a scorer of remarkable goals himself, seemed to applaud his opponent’s effort, which was telling.

The Ivory Coast icon scored several ferocious strikes too, with his half-volley on the turn against Liverpool in 06/07 particularly noteworthy. That season also featured great goals against Barcelona on home turf and Everton at Goodison Park, then there was that stunning free-kick at Arsenal in 09/10…the Blues legend scored the lot!

In addition, Togo star Emmanuel Adebayor left an indelible mark on the North London Derby with a crashing self-made volley for Arsenal at White Hart Lane in September 2007.

Acrobatic efforts aren’t left out either: Who can forget Kevin-Prince Boateng’s scissor kick for Las Palmas in October 2016, which came about from Tana’s back-heeled assist or Masuluke Oscarine’s last-gasp overhead kick to salvage a draw for Baroka FC against Orlando Pirates in late 2016?

Demba Ba also netted two spectacular FA Cup goals against Manchester United and Manchester City in 2013, the first at the Bridge and the latter at Wembley.

Indeed, it’s a tough choice to make given the glut of brilliant strikes over the years.

The striker’s effort was different to the Nigerian ace in that, while the playmaker’s magic all happened in the box, the 1995 Ballon d’Or winner ran the length of the field; and beat three Verona players en route, to score in a 4-1 win for the Rossoneri.

Manchester City icon Yaya Toure netted several unforgettable strikes for the Citizens in his Premier League stint, but none probably outdo his solo effort against Aston Villa in 13/14.

City’s box-to-box midfielder received the ball inside his half, sprinted at full tilt past two Villa players, leaving another three in his wake to finish past Brad Guzan.

Occasionally, skill and individual brilliance are secondary to magnitude, as seen at the 1998 and 2010 World Cups. 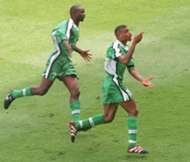 Having had an Okocha throw-in cleared by Fernando Hierro, Sunday Oliseh smashed in a thunderous attempt from about 30 yards to complete Nigeria’s 3-2 comeback against the fancied La Furia Roja.

It was an unforgettable hit from the midfielder who reminisced over the importance of the goal in 2014.

“People always talk about it back home,” Oliseh recalled in 2014. “The fact that this goal propelled us to winning the group, eliminating a great team like Spain, and the fact that it cemented my family’s name in the history of world football, it couldn’t be better.”

12 years later, Siphiwe Tshabalala finished off a brilliant team move to put South Africa ahead against Mexico at the opening game of the 2010 World Cup. A packed Soccer City, and likely the entire continent, erupted after the wideman’s thunderbolt sent Bafana Bafana 1-0 up.

While the match finished 1-1, that strike is forever etched in every African’s memory.

Honourable mentions go to Sikiru Olatunbosun’s volley for MFM FC against Rangers in 2017, Hlompho Kekana’s strike for South Africa in 2016 away at Cameroon from inside his half, or Tshabalala’s 40-yard volley for Kaizer Chiefs against old side Free State Stars in 2015, at the same scene of his World Cup opener in 2010.

From Okocha’s wizardry and effrontery, to Weah’s brilliance or Oliseh’s scorcher, Africans have always scored memorable goals from time immemorial, but which is your favourite?